By popular request, I will again address the issue of the best guns in order of importance to a prepper who is in the situation I am in, whatever that may be.

If you are not in my situation, then you are free to rank guns according to your needs. But this my list is for my needs so don’t get your panties in a bunch because I prefer a 30-06 instead of a .300 somethingorother whisper magnum, or that I am perfectly content with only nine millimeters of diameter while others are absolutely sure that adding one more half-millimeter of bullet radius will be the clear difference between everlasting life and certain death. 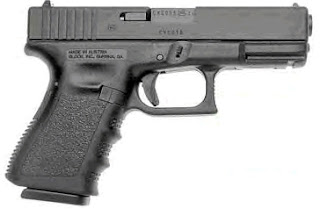 In case you've lived under a rock for the past three decades, the G19 is a midsized polymer frame 9mm of some 35 parts if you include the magazine. The G19 is the perfect size, operation, and function for the ultimate single gun to have no matter what. Glock Perfection extends from CQC, basic defense, and yes, hunting. The 9mm round is a deer killer, so everything smaller than a deer will also fall down when hit. The hunting accuracy range of a 9mm, Glock or otherwise, is limited to 30 yards plus or minus, but since I can put half a dozen slugs down range in a couple seconds when needed, if we are truly Blackhawk Down Hunting, then a dead deer is a dead deer. I really don’t plan on only having my G19, but since this is an academic exercise, the G19 is my final answer.

Notice the period after the five? This is also my final answer. The AR platform has more than its share of faults, most self-inflicted by unscrupulous capitalists who don’t mind selling substandard machinery wrapped in Red, White & Blue packaging. A quality AR, and yes in  .223/5.56 chambering, will work with plenty of reliability and even when dirty.

If you got a screaming deal on your AR, I hate to break it to you but you probably didn’t. You got a dud. Good ARs don’t need no stink’n markdowns. In the off chance you don’t know about the Takedown version of the 10/22, then know it is almost the same as a regular 10/22 except it comes apart in the middle between the action and the chamber. It’s an almost perfect design. But why a Takedown you ask? Two reasons; size and cleaning.

The size is obvious. If you can make something half as long, it will fit in twice as many places. How do you plan on carrying your rifle as you bash through brush, climb up mountains, and carry as a backup to another rifle? And half the size is just icing on the cake. The real treat is cleaning.

Cleaning a regular 10/22 is not fun. Cleaning the Takedown is a snap. You got an open-ended tube on one side, and great access to moving parts on the other. How simple is that? Let me answer, Simple!

Why not one of Ruger’s fine auto .22 pistols? Again, two reasons. First, sight radius. The pistols are wonderful, but for general-purpose medium to longer distance survival shooting, you need a rifle, not something you use to show off your shooting skills in competition. Imagine how fun it would be using your Mark III to fend off attackers while your dominant arm is injured, or trying to hold a bead on some critter while you huff and puff in the sweltering heat. That’s why we invented rifles.

And the other reason? Well I’ll give you 10, but no more than 10 of them. The Mark III auto pistol magazines hold 10 rounds. I've not seen an aftermarket mag of quality that holds more than 10, so if I want that limitation forced upon me, I'll move to California. I have 25 round mags for my Takedown. Yes, they are worse to load then the Mark III mags, but I get 2.5x as many chances, or 5x, or 7.5x with three mags. Since .22 ammo is the best deal on the planet, be willing to exercise your 2nd Amendment as much as needed.

If you need more than the top three above, you are in bigger trouble than you can imagine. However, if you really do need to consider more guns, I’d suggest either another AR, or another Glock, a G26 perhaps.  Didn’t see that coming, did you.

The duplication issue is not one more gun, but one more consumer of the ammo you have in abundance. I know some preppers with half a dozen different ammo needs in their main plans not to mention another three or four flavors of ammo for their backups, burieds, and Bugouts. If someone gave me an AK, I’d get rid of it. Free military surplus? Forget it. British .303? No thanks; I already have a boat anchor. Seriously folks, just what kind of situation requires a pile of various guns spread out all over your prepping grounds? Enough with the Red Dawn Kool-Aid already!

And I also know preppers who have 5k rounds of .223 ammo but only one gun that shoots it. Same with their pistol ammo. So they are just one malfunction away from having some great bartering material. "How about I trade you nothing for your case of .223? Sounds fair to me since your force multiplier just bought the farm, while mine is painting a big fat red dot on your beer belly."

There is no security in more guns, especially when the cultural and historical diversity of the firearms belongs more in a museum than in a crisis. Less is always more. If you have thousands of a particular round, but only one gun that eats it, then you are not prepping well. This is not the time to get creative. This is the time for redundancy.

And now to the anticipated questions.

So why no shotgun? Personally because shotguns are a stupid solution for most situations. Before you go all ballistic with my apparent heresy, consider that the gun in your hands is the gun you will use. Shotguns are excellent for many things. But also so wrong for many situations. If it really comes down to it, a shotgun is a poor solution for too many problems. It’s as heavy as a rifle, holds far fewer rounds than anything else, and has a limited range. And what's with the latest trend of double barrels gaining prepper popularity? Give me a break. Are you prepping or poaching? Why not a block action single shot. Or a muzzle loader? Folks, turn off the TV and enter reality. Learn the difference between a good gun and the right gun!

Add to that the weight of ammo, the two-handed operation of a pump, and the fact that regardless of the hype, you will not be swapping between shot sizes during crunch time. Seriously, the shotgun is great when things are slow and good, but if it is me and my AR against you and your shotgun, I’ll just hang out 50 yards away and wait for a clean shot while you panic and spray lead and noise in my general direction. I learned that tactic from the wolves.

Many fine folks espouse the virtues of a shotgun, and they are right about the mechanics of the gun, but in my situation, the limitations of a shotgun far override the benefits of the care and feeding of another gun. And speaking of reality, even that bozo headcase on The Walking Dead whose constant carrying of his Mossberg no doubt boosted 12 gauge sales still got bit by a Z.  And the hundreds of pounds of ammo the guy went through in the first two seasons somehow also escaped being captured on film. Stick a hand full of 3” magnums into your pocket and see how long you’re comfortable. And that’s just six bangs, maybe eight if you have big hands.

What about the bolt action hunting rifle? It's a great gun to have around but if you are traveling light, skip it. Too slow for combat, and unless you are going on an offensive shooting spree, just do your hunting with the AR.

Wheel guns? Too heavy. Too slow. Too few shots. Fun to play with and shoot, but leave them in the safe when it's time to roll.
The AK-47 is, in my opinion, nothing more than a cheaply stamped out rattletrap of a firearm. The reason it is popular is because it's cheap. And the cheap crap ammo for the cheap pot metal AK is dirty and filled with duds. What you would save on cleaning supplies alone would pay the difference between an AK and an AR. If you want to pay for quality ammo that is as reliable as the AK, then you can cross off inexpensive-to-feed from your list of AK benefits. Also, AKs are not known for accuracy, so why would you want a want one? Oh yea, they're cheap.

There is an inverse relationship between number guns and personal security. Many have lost their lives due to miss-operation, wrong ammo, and unreliability in firearms. I know many hunters who headed into the field with their .270 rifle and their 30-06 ammo. It's an easy mistake, but while a deer lived another day, the same won't be true for the prepper. Under stress you don't want to be wondering how the safety works, or if the extra mags you grabbed in the dark are the right ones.

The Wall Street gun marketeers are trying to convince Americans that they need for more and more different guns in your family. A .380 is great but a 9 is better. And a 10 is better than that. And a .40 is even better. Or maybe that's the other way around. Unless, of course, you have a .45 that is. But those are all pistols and rifles are better so get some of those as well. And then there is the shotgun, er, make that shotguns. Buy! Buy! Buy!

If your prepping guns have a combined weight more than you, then you are in serious trouble.  Luckily there is still plenty time to remedy the situation. Well, at least at the moment.