A Funny Thing Happened On The Way To The Apocalypse (or Why Nouns are Deadly!) 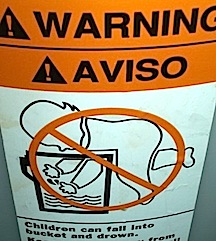 A funny thing happened on the way to the apocalypse. Since you’ll never guess what it was,  I’ll just tell you. Half of those productive members of society who considered themselves ahead curve (also known as preppers) are literally drowning in their nouns, while the other half who have been prepping on a steady diet of verbs are doing just fine.Great in fact.

For those new to the prepping aspects of the parts of speech, let me enlighten you about the dangers of nouns and the important survival features of verbs. First of all, nouns are heavy, expensive, and proprietary. Nouns take up space, have a shelf life, and are easily stolen. Nouns limit one’s thinking, and reduce your options. In a nutshell, nouns are deadly.

When you see a biohazard symbol, do you first think of it’s message as a verb or as a noun? When a real biohazard SHTF event occurs, those verb-seers will already be on the road away from the danger while the noun-lovers will be standing at ground zero debating the metaphysics of the situation, and what other nouns should be included in the discussion. 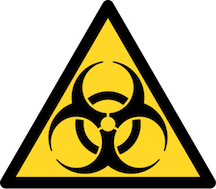 Verbs, on the other hand, are universal. Verbs transcend time and space, and work in any language, culture or environment. Verbs are essential, ingrained, installed, and automatic. And best of all, verbs simplify the problem we have with all the survival nouns by reducing it to it's most basic level.

So what does this mean for the prepper? Conceptually it means that all the nouns marketed to those with a bend towards survival are really just indicators of what we should be doing. They are not actually what we have to do. Big difference. Huge!

For example, pick a survival product. Any product. And then search for reviews whether on YouTube, a blog, discussion forum, or Amazon. Unfortunately, most so-called advice is a discussion about the noun in terms only a noun would understand. You’re probably thinking, “Of course it should be. That’s the point of the review.”

But is it really?  I think not.

The noun (or item, or product, or thing or whatever) is a conduit towards a verb. And the verb is what’s most important. Nouns can enhance verbs, but they cannot replace verbs except when marketed to preppers with more money than vision. The problem is that the noun is not the solution. Instead the verb is the solution.

A noun can split firewood. In fact any number of different nouns can achieve the same pile of broken logs. But the verb is the point of the firewood. If you fixate on a traditional chopped-log fire in a traditional pit, stove, or fireplace, you will miss all the other manifestations that the verbs of burning wood encompass. What is the end product? Heat? Light? Reduce brush? Nostalgia?

Nouns can be applied a protective situation, but they cannot protect you. Protect is a verb.
A noun is a pathway to a verb, but if one looses sight of the verb, they will be in for a cold night, empty belly, or gunshot wound. And that is the problem with the reviews of nouns. In most cases the author of the review is forcing the noun to preform, but then stumbles when explaining the value of the noun. For example...

"...you need to clean an animal real quick."

"It's a must that when you're going out in the woods you gotta have a good knife."


Why? Because the spirit of the noun is hollow and without intrinsic purpose. The only purpose of a knife is to verb something. Many reviewers of survivalist products attempt to discuss the object, but end up admitting (intentionally or not) their lack of authentic interaction with the object. Or just as often they stretch their quick, clinical play with the product into a litany of gross assumptions about its true performance as a noun, but rarely as a verb. That is because nouns are easy to review while verbs are not. Verbs require experience. Verb require realistic comparables.  Verbs require deep knowledge. However, we do need the noun for its relationship to verbs, so not all is lost.

The amount of advertising designed to scare preppers into buying nouns has exploded in the past couple years. From blades to backpacks to food to firearms there is a never-ending supply of nouns to buy, store, hoard, and steal. And tomorrow there will be a new list of essential nouns that you cannot survive without.

But verbs provide comfort, confidence, and solutions. Verbs arrive in the form of purpose, and that’s what all prepping is about. You need to be able to describe your objective with verbs and then implement them with whatever nouns you have on hand.

Verbs provide the prepper with balance. A true bugout bag is actually filled with verbs. Nouns have to be managed, maintained, protected, carried. But verbs...verbs will save your life.