Fiskars is a village in Finland that gave it’s name to a company back in 1649 owned by Dutch guy named Peter Thorwöste. Mr. Thorwöste started a blast furnace and forging operation that went from ironwork to copperwork and ultimately in 1832 cutlery in 1832. 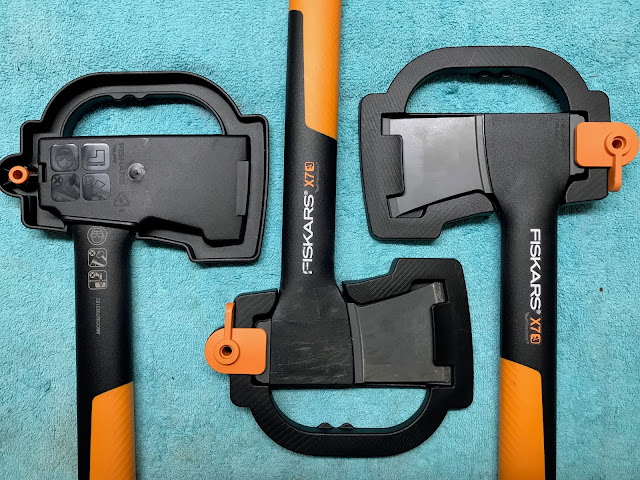 Cut to today. Fiskars is a household name for inexpensive and innovative cutting and chopping tools that often contain plastic components and bright orange colored accents. Oddly, or perhaps more a contradiction, the plastic-handled Fiskars hatchets and axes have a near rabid following on the scale of the all-steel Estwing choppers. I guess that’s proof that function trumps form.

For a $25 plus or minus hatchet, the Fiskars X7 Hatchet is surprisingly effective. In fact, the hollow-handled X7 does something that almost no other hatchet can do: place a vast majority of the weight of the tool on the cutting head, yet be strong enough for real chopping.
Hatchets are designed for one-handed operation, and as a chopping tool, the there are two simple machines at work, but only one that requires mass. The handle is a lever that moves the rotational energy into a larger diameter circle of motion. That leverage is consolidated onto a weighted head in the shape of a wedge (two inclined planes base to base). The weighted momentum of the hatchet head is where the action is. When the blade (known as a bit) hits wood, the sharp end of the triangular head burrows into cellulose spreading apart the grain. If the wood wins, the bit stops. If the bit wins, the wood splits apart forever.

The shape of a hatchet head has a couple traits that tell the story of how well the tool will do particular jobs. Splitting hatchets like the Stihl go from narrow to wide very quickly. While the modern tomahawks like the Estwing and the CRKT remain quite thin. A deep wedge will split rapidly, but loose speed into the workpiece almost immediately. The narrower the wedge, the deeper it cuts, so if your workpieces include things like animal carcass and human skulls, you might want some deeper penetration. In the middle are the camp-style hatchet and axe heads that run general duty but are limited in their splitting and battle qualities.

One of the most unique features of the Fiskars X7 Hatchet is that its hollow plastic handle can be used for a mild survival kit. Just north of the excessive swelling at the base of the handle is a lanyard hole. The palm-side of the handle base is called a heel, with the finger side named the toe. The X7 has a very pronounced toe. So pronounced that I can hang the hatchet by the toe on the web of my hand (between thumb and index finger).

Back to the lanyard holes. There are actually a pair of them, one on each side of the emptiness. With 11 inches of emptiness filled with survive (I’ve taken to use the word “survive” as a noun lately), a bolt with wingnut or some other fastener can secure the tools within the grip. I’ve played around with different kit stuffed into the Fiskars X7 Hatchet handle including a half-dozen feet of paracord, a CRKT Pazoda folding knife, and a Swedish Fire Steel minus the cord and striker. The Fire Steel fits rather snugly so I first inserted most of the paracord, then the knife, and then tied a loop of paracord on the Fire Steel with a small section of paracord sticking out the bottom of the handle. A bolt and wingnut secure the kit. When extracting the kit, once the bolt is removed, the paracord is pulled popping out the Fire Steel and the rest comes tumbling out. The paracord is also an effective noise dampener for rattling objects since the hollow plastic tube of a handle resonates sound quite well.

Another option for fun is to drop a trio of orange Bic lighters into the handle followed by a little tinder to snug things up. Add the bolt, and you’ve got a fire kit. Of course this route is more orange than function.

While I’ve not had personal experience with a Fiskars handle shattering in the cold, I have heard such tales. I’ve also see pictures of broken Fiskars hatchets and axes. Fiskars is known for great warranty service, but ideally you shouldn’t have to use it. Another concern is that if the handle does become useless, the design of the Fiskars X7 Hatchet head is more like the primitive stone axe heads that contained no eye (hole through which a handle is inserted). Instead, to reclaim the cutting prowess of the hatchet, any handle remnants still attached to the head would need to be removed, and the head could then be lashed onto a branch or wedged into a split stick and tied in place.

The chance of handle breakage increases as the temperature drops and the handle length increases. The “FiberComp®” plastic material is surprisingly durable and the tube design is probably stronger than a solid plastic or fiberglass handle. Further, solid handles of steel and fiberglass are known for effectively transmitting the shock of a wood strike directly to the nerves in your hands and arms.

The bit is coated with a non-stick film somewhat like a frying pan. This allows the hatchet head to penetrate further into the workpiece, and slide out backwards with less effort. The factory edge is plenty sharp to use right out of the box, but I did manage to chip it with less effort than usual. The Fiskars X7 Hatchet has a traditional compound bevel edge meaning the approach to the edge is smooth but just before reaching the edge, there is a sharper drop angle  to the edge proper. This double bevel is fairly easy to sharpen second only to the flat bevel where there is only one angle.

I also felt the edge dulled faster than some of the convex and traditional bit grinds, but that could also be the steel. However, when I used an axe sharpening puck to clean up the damage, it took much longer than my carbon steel axes and hatchets. But the Fiskars X7 Hatchet was back in service in no time since we are only talking a few minutes.

The widest metal on the head of the Fiskars X7 Hatchet is only five-eighths of an inch. While the narrowness reduces this tool’s splitting capabilities, it does boost its knife-like fine motor skill duties. With a hand wrapped around the head, it's easy to feather sticks for fire starting, and process fish and game.

Although the Fiskars X7 Hatchet is not anywhere near what I would consider an heirloom hatchet, it is a workhorse, and an inexpensive one at that.
Posted by Doc Montana at 7:30 AM