There has been an explosion of carry pistols and what I call “city variants” of guns over the past couple decades. From a Glock in every home, to more concealed carry permits that ever, to a wide choice of magazines about the topic in the grocery store. It’s no wonder that notable wheel guns seem a bit of an oddity these days. Especially the larger caliber “hand cannons.” 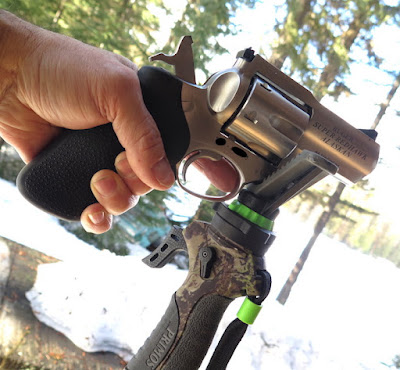 Mr. Callahan
While I won’t completely dismiss the “Dirty Harry effect” on big muzzle wheel guns, I do find the .44 magnum a proper load when follow up shots might not be an option. Like with bears for instance. Now I’ll admit I am a fan of bear spray. I hear endless city folk and even plenty of suburbanites complain that pepper spray is ineffective, full of drawbacks, and nowhere near as good as a firearm. Basically that tells me that there are some holes in their knowledge about bears, bear spray, and firearms.

First of all, pepper spray is effective on bears. I find it a little funny that there seems to be plenty of survivors (mauled maybe, but living to tell the story) who sing the praises of pepper spray, and plenty that don’t. The one thing they all have in common is they lived. I’ve drawn down on bears with both pepper spray and rifle. Luckily I never had to fire the pepper spray, but I have the gun. One black bear took two 30-06 shots to the gut, and three more 30-30s to its midsection and hindquarter before I got a clear view to put a fourth 30-30 into its head. Bear and moose hunting is probably the closest to African dangerous big game hunting as you can get in North America. Hogs might fit there too in the cheetah/lion category.

Bear spray is a deterrent to an attack. I might not thwart it entirely, but the painful sting of cayenne in the bear’s eyes and nostrils is a pretty good start. And accuracy, while helpful, is not required. Just aim in the general direction and let the cloud do the talking. However, wind, distance, expiration date, and duration of the spray all set limits on the experience for the bear. And, of course, when the spray can in empty, it might be game over unless you have a backup plan.

A Little Big
Enter the Ruger Alaskan. A massive handgun stuffed into a small package. The Alaskan, or Super Redhawk “Alaskan” as its billboarded on the right side of the barrel, is an overbuilt stainless steel six-shot revolver of excessive proportions except in barrel length. At only two-a-half inches, the barrel is frightening from the shooter’s side. When Dirty Harry was bragging about the power of his magnum, he had about six inches more out in front to weigh down the recoil and keep the muzzle somewhat in the same direction as the target after the bang. But surprisingly, the Ruger Alaskan is quite manageable, and due to its weight, balance, and heavy rubber Hogue grip, the Alaskan is nowhere near the squirreliness of snub nosed .357’s.

When shooting .44 shorts, you can double-action all six cylinders in a row grinning all the way. .44 magnum rounds certainly remind you that they are not for the weak or fainthearted, but again nothing to be scared of. However, the +P+ Buffalo Bore heavy loads do send a tingle up your arm. It’s not that the muzzle flips, but more like swinging an aluminium baseball bat into a brick wall. It takes a second or two for the recoil jolt to transform into a sharp sting. But if you ever do “need” to fire the Alaskan, you won’t notice the recoil. I guarantee it.

When talking blunt force trauma, the .44 is an ideal cartridge. But unlike hollow point bullets popular for those unfriendly human encounters where you want to disrupt organs and bleed out the foe, the idea behind a hard cast flat nosed bullet is pure bone-breaking concussion. If a bullet fragments early in its journey through an angry bear, it will have little to no effect in any time frame that matters.

As Isaac Newton penned 300 years ago, force equals mass times acceleration. That means that the force of a .44 magnum can approach that of a 30-06 rifle bullet if the .44 bullet weighs twice as much, say 340 grains compared to 165 grains, but only traveling half as fast, say 1400 fps compared to 2700 fps. So when playing at the upper tiers of pistol power, you are treading far into the realm of rifles.

And More
The Ruger Alaskan is more overbuilt than the other Redhawks in a couple ways. One of the most beautiful aspects of the Ruger Alaskan is that the entire main frame is one solid piece of stainless steel that completely surrounds the cylinder and extends to the muzzle. Traditional revolver designs have the barrel screwed into the main frame. Not the Ruger Alaskan. Another visible feature is the thickness of the top strap that runs from rear sight to barrel. So beefy is the top strap, among other parts, that it is one of the very few listed handguns that Buffalo Bore suggests can handle it’s most powerful solid cast bullet +P+ cartridges. Don’t bother looking for a Smith & Wesson on the list. There isn’t one.

Packing the Heat
For Alaskan carry in bear country, I have three solutions. The first is the standard Galco Dual Action Outdoorsman belt holster made specifically for the Ruger Alaskan. It is a beautiful piece of gunleather and the first choice of most Ruger Alaskan owners.

My second carry solution is for more specific activities including hunting, backpacking, and fly fishing. It is the Galco Great Alaskan Shoulder System chest holster right for the Ruger Alaskan. A nearly identical holster to the belt version but with a trio of straps that snug the holster to your chest, belly or sternum depending on need.

Often the belt space is hidden inside waders or under a backpack waistbelt, or occupied with other kit. And there is risk that you might not be able to reach your belt area depending on the turn of events. Plus with a belt holster you have to commit to a carry side, in my case on the right hip. Drawing the Ruger Alaskan with the left hand from a right hip is not easy under the best of circumstances, and if you “need” to do it, the circumstances are certainly not best.

Drawing from a chest holster with support hand is still not the quickest but much easier. The final solution I use is to plop the pistol into the Hill People Gear Recon Kit Bag. This critter is like a thin fanny pack that rides securely on your chest. I prefer this method of carry when on cross-country skis, snowshoes, or mountain biking.

For extra ammo (being optimistic) I use the Galco 2x2x2 ammo pouch
when carrying in leather, and orange Tuff stripper clips with the Recon Kit Bag. Unlike auto pistols, carrying a handy 18 rounds of .44 magnum is quite a bit. Of course if out in the sticks for  more than a week, I would up the round count to at least a couple dozen bangs depending on my other guns. If rifle hunting, not so much. If my only carry, then very much yes.

Home on the Range
Once you get the hang of the sights, the Ruger Alaskan will shoot all day long making a hockey puck-sized group. That’s from a rest, of course. On a bench or table, anything works. But for the open field, I prefer the Primos Gen 2 Bipod Trigger Stick. It allows me to hold the Ruger Alaskan at eye level, and I can quickly put all six rounds into a five dollar bill at 25 yards which is plenty good for hunting. Of course if I take my time, I can keep those shots around Abe. With a little work, you could probably feel comfortable deer hunting out to 50 yards with the Ruger Alaskan. And in a survival situation the ethics of fair chase take a back seat allowing you to push your luck. There are plenty of reports of Ruger Alaskan owners keeping everything inside a dinner plate at 150 feet.

For bears, however, there is a different equation at work. But first a joke: Do you know how to tell if a bear is really charging you or bluffing? Answer: If it's a bluff, the bear will stop. And within that joke lies the problem. You have very little time to decide if how you will respond. If the bear gets too close, it won’t matter how many shots you get off. If the bear is bluffing, or just curious but not an immediate threat, well then you can quickly mess that up. And having an injured bear running around is all kinds of bad. 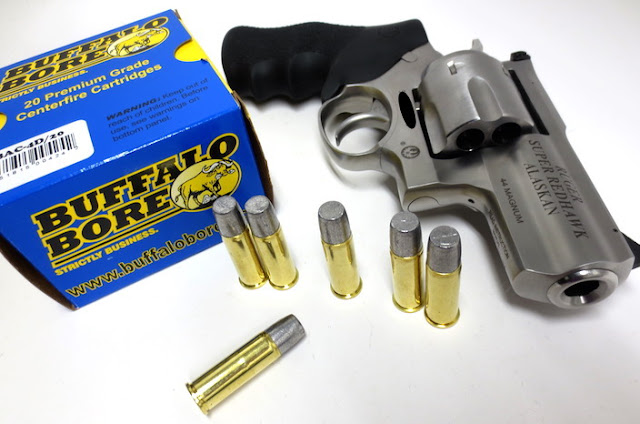 Looking for Action
The trigger on the Ruger Alaskan is fine. Quite fine, in fact. In single action the trigger trips around five pounds. Expect a dozen or more pounds of pull to snap off a round in double action. But if you can hold this gun safely, you can pull a 12 pound trigger.

The cylinder on the Ruger Alaskan spins counter-clockwise so keep that in mind if you need to load one more round. I also played around with three different Ruger Alaskans in .44 before deciding on the one I liked. The cylinder play was a hair too much for my taste in the first two. Well one was quite a few hairs off. But the third locked up like a rock. When dropping almost a grand on a narrow use pistol, perfection is part of the deal.

Should the need arise to have a handgun with this kind of power be needed for chores other than dispatching pesky four-leggers, the Ruger Alaskan is up to the job. The list of guns for survival is as deep as it is wide. But there is a popular convergence around those calibers of the .22 variety and millimeters in the nine to ten range. Most lists would put the Ruger Alaskan outside the top ten so I would have suggest that this particular gun is more on the experienced preparation list, or for those living in the proper geography.

Ruger’s naming this the Alaskan is no accident. But it works fine in Montana, Idaho, and parts of Wyoming. For those states whose bears are smaller than my dog, I would suggest something else. A 10mm perhaps. But when it comes to sheer firepower for close quarters combat in the wilderness, the Alaskan is in a class by itself.