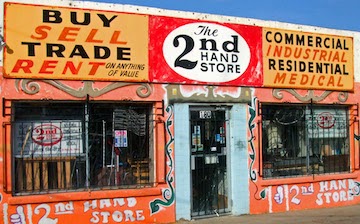 I don't know about where you live, but around here the pawn shops and second hand stores are filled with top drawer equipment that would make any prepper overbuy. As an experiment, I entered one of my fair city's finest stores of the pawn shop/second hand/junk store variety and pulled out a classic listing of  BOB essentials. Within 20 minutes, I had a high-end pack filled with high-end equipment albeit a little dirty, used and in some cases a touch smelly. 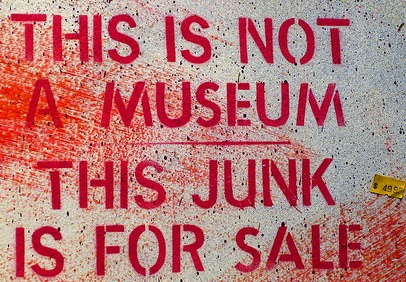 For obvious reasons, I skipped down a few items on the list leaving food and water, etc. for safe acquisition elsewhere.

Starting with a bag, I had a range of top brands to choose from. These weren't tactical bags, but rather of the climbing and backpacking genera. Gregory, Osprey, Lowe, The North Face, and Arctery'x were all possibilities. I chose a rather vintage Lowe travel pack for it's large size, versatility, but most of all, low price due to its age and condition since that is the point of this exercise.

There was a small selection of tents, and I could have had my way with any one of them. Fortunately I am already well stocked in tents, but for this experiment, I imagined that I picked up an elderly but still quite operational North Face 3-season tent complete with stakes and ground cloth. 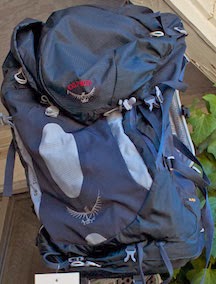 I eyed the sleeping bags, and opted to shop around. Outside the gross factor, a used sleeping bag is always a gamble so I moved that item over on the list by the food and water. The sleeping pads, however, were another story. I found a mint condition ultralight ThermaRest, and a new-in-the-package folding foam pad.

Near the sleeping bags and backpacks sat a barrel full of fishing rods. A sharp eye is needed to quickly discriminate between the quality and the junk, the broken and the bent, and those mismatched like a cheap rod with a excellent reel. I was able to mix and match components myself netting a fine 4-piece fly rod, reel with quality line, and handful of flies for literally pennies on the dollar. Plus a rod case and fly box tossed in the deal as long as a few dents and some wear didn't bother me. I also grabbed a small open-face spinning reel and telescoping rod. A small yellow pocket tackle box filled with hooks, bobbers, spinners, and a couple other lures was tossed in the mix, again for pennies on the dollar rounding out the fishing side of things.

Down the isle were glass cases filled with an assortment of valuable prepping hardware. The only problem was the treasures were mixed in with piles of pure crap, Chinese knockoffs, and the seriously damaged goods of someone else's adventurous life. 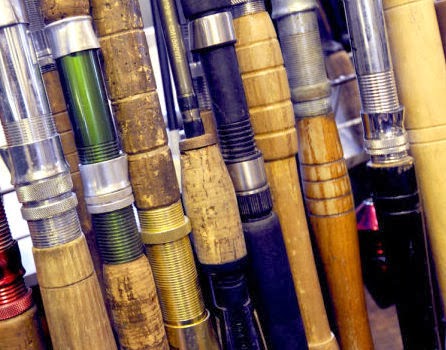 The fun thing about pawn shop prepping is that often the prices for a category of item are relatively fixed regardless of brand, model, features, or even condition. I chose two multi-tools, one a Leatherman Skeletool, and the other a Gerber something or other that looked, felt, and operated perfectly.

In the knives, I got a Spyderco Endura folder and a Kershaw fixed blade hunting knife and sheath. Also in the case were a selection of sharpening stones and devices. I chose a combination sharpening kit by Smiths. There were a few SOG knives to choose from, but alas, SOG like some other companies including Gerber, Cold Steel, and Kershaw have chosen to produce some really low end stuff. In pawn shop language that translates into not worth much without some stellar pedigree. Unless I can do my internet homework before buying, I avoid SOG especially. I might miss out on a great deal, but I could just as easily pay more than retail for a POS Chinese-made knife. You cannot go wrong with Spyderco and Benchmade. Period. In this case, the Kershaw was made in Japan and predated plastic blister packaging.

The flashlight selection was a little sparse when it came to quality. No Surefires in here. But a bright yellow 4-AA cell LED Streamlight was had for a song. No batteries so it was a leap of faith until tested. But the Petzl headlamp did have batteries so that cinched the deal on that one.

There were a handful of pistols and revolvers to choose from. If I was actually going to follow through on the whole Pawn Shop Prepping exercise, I would have chosen an older and rough looking Ruger Mark II .22 auto with six inch barrel and extra 10 round mag, and a Taurus 9mm pistol with one mag. I am not much of a Taurus fan, but in this part of the experiment, beggars can't be choosers. Of course I could just walk across the street to another pawn shop and pick up a Glock in one flavor or another, but this experiment requires patronizing only one store. That's why it's an experiment.
Digging through the ubiquitous box of holsters, I found two that fit, and will easily work for my needs. Had I really bought the guns, I'm sure the holsters would have been thrown in gratis. And maybe even a leather belt. 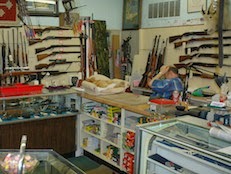 No padded case, however, was available for the Nikon Monarch binoculars, but the price was low enough to overlook the light scratches on the lenses, and the slight play in the diopter adjustment. Just make sure the alignment is perfect. Many pawn shop binos have been dropped. I have even held a pari of Swarovski Els to my eyes only to grimace with the double vision of misaligned tubes. Yours for only slightly below retail. I'm sure they will make some eBay shopper happy since that's where much of the pawn shop high end goes, with the nice guns listed on GunBroker.com.

Digging around deeper, I found an old MSR multi-fuel camp stove with fuel bottle and two pots. The Silva Ranger compass with clinometer was, in my second hand store jaded opinion, priced a little high, but I'm sure when the cash register bells settle down after ringing up my BOB, I'll get a better deal. 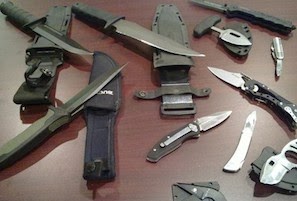 For fun, I picked out a vintage stick match holder and orange whistle I was allowed to remove from a used PFD. I found a couple carabiners as well. A word of caution here: never buy used climbing equipment from an unknown source. In my case, these carabiners will serve more domestic needs, but in a life-or-death situation, I don't think they'll let me down...literally.

In the tools area, I found three essentials, all Craftsman; an 8-in-one combination screwdriver, a 6-inch adjustable wrench, and pair of slip-joint pliers. I also found a Estwing hatchet that had seen better days...much better days, but I knew a few rounds with Mr. Grinding Wheel would put Mr. Estwing back on the straight and narrow. You see, the good thing about used equipment is that it can appear in such bad condition to seem almost worthless, but with just a little elbow grease, it's back in top working condition regardless of how many beauty pageants it had lost. 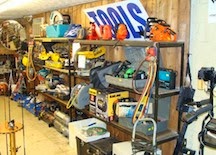 A pleasant surprise awaited me in one of the tool bins, so much so I had to contain my excitement since no price was listed on the item. It was a Silky Pocket Boy folding saw. The handle was dirty, but the blade looked unused. If you somehow have escaped knowing about Silky saws, they are some of the finest folding hand saws in the world. Made in Japan, you can choose from many different blade tooth configurations and lengths. They are legendary for long saw life, and handle quality.

There was also a machete available. It needed some work, but since a machete is not very high, or even on my bug out bag checklist, I noted its availability and moved on. Strangely, a used machete costs the same or more as a new one.

Like the sleeping bags, I passed up on the selection of two water filters. As an experiment, it was good to know such an opportunity was present, but still, there were too many unknowns with the filters to risk it. But in a pinch, I'd be first in line to buy one for the $10 or so it would cost regardless of brand and condition. Same with used water bottles.

On the electronics side, a pair of Midland walkie-talkies, an older Garmin eTrex GPS and Oregon Scientific emergency weather radio could be had for a song--and out-of-tune one at that. 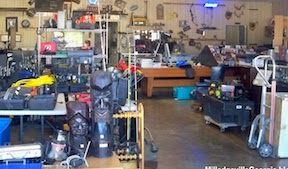 In the end, I proved my point. For a very minimum of cash it is possible to outfit a heck of a nice bug out bag. A trip to the Goodwill would round out the cookware, can opener, extra clothes, and outerwear.

Now this was just an exercise in availability of inexpensive but quality items common to Bug Out Bags. However, any given pawn shop or second hand store only has a few of each item on hand, if that, so a mad rush to the used stores by the populace will only net a few well-stocked BOBs.

My suggestion is to do it now. Or tomorrow if the stores are already closed today.