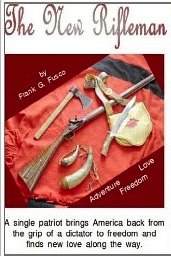 First, here's the description of the book ala Amazon.com:

A botched presidential election leads to the sitting President discarding the Constitution and turning America into a brutal dictatorship. The protagonist assassinates the President, using a rifle of the type that would have been employed in the Revolution of 1776. His escape and survival in the wilderness of the Arkansas Ozarks using 200+ year old woodsman’s skills is non-stop cliff-hanging adventure. A mysterious relationship with a mountain lion eventually leads him to a community of new revolutionaries who share his desire to return America to a Constitutional form of government. The spirit of the protagonist is not unlike that of the original revolutionaries who created America in 1776.

To appreciate this book, the reader will need to separate the writing from the storyline. Where The New Rifleman shines is in the flow of the situation. Where the reading experience is tarnished, sometimes to a painful level, is when the author attempts to insert raw emotion into the otherwise rather stiff characters.

It is clear the author is passionate about a particular aspect of a specific period in American History as evidenced by the uptick in details. However, a few early paragraphs had me worried that the author was going to borrow heavily from the writing style of dime-store detective novels. Luckily the author got it out of his system early and balanced the depth of detail with the significance of the event under discussion.

Readers of this genre consume the words for the value of their nutritional adventure, survival tips, gun details, fun plot twists, and cathartic release for political frustration. As a reader and writer of survivalist/patriot/prepping/post apocalyptical literature I found myself wishing there were more details about the small stuff and less about the big stuff. Many times it felt like the author was elbowing his buddies in the ribs with distractingly obvious and continuous references to real people, real groups, and inside jokes that you had to be there in order to appreciate them.

The romantic overtones were a struggle to read. There is a preoccupation with both bodily functions and sex (both heterosexual and homosexual) along with not-so subtile racial stereotypes that may limit the reach of this book because even if the reader enjoys patriot themes, each unnecessary and outdated reference increases the chance of diverting the message of the book into geography the author is unprepared to traverse.

The numerous references to "sobbing" were little more than a distracting pseudo-emotion desperately in need for a new word given how easily the main character would sob when thinking of his family. This situation was only compounded by the speed at which the protagonist begins a new life with a new woman, all with his daughter's instant blessing.

Where this book shines is within its dark futuristic application of law enforcement, weaponry, technology and raw American survival ethos. The abbreviations and nicknames for the groups may have sped the typing process, but degraded their substances as viable foes. But those challenges to the story were more than made up by the effective technological advancements in this near-future landscape. The very real possibility that such tech could exist keeps the storyline afloat even as the occasionally clueless rifleman does his morning business day after day.

Back in 1987, Louis L'amour published a tome titled Last of the Breed: A Novel. It traced a vaguely similar challenge where survival depended upon the application of ancient but effective skills to fight off and out smart the army chasing him. What was different between Last of the Breed and The New Rifleman was in Breed, the spiritual direction was from the ground up with the main character digging deep for strength and accepting responsibility every step of the way. In Rifleman, however, it was top down spirituality where stuff just happened and was given Divine meaning ex post facto. The danger with this top down belief is it must embrace the inverse as well. For every bullet you believe God prevented from hitting you requires the same logic that God choose not to intervene in the lives of those hit by bullets, presumably because they are not as worthy. It doesn't work only one way. You can be thankful, but you cannot be entitled.

A curious mythical bond between man and animal enters the story half way through throwing a monkey wrench into the patriot plot line. From then on, the reader was challenged to decide if each new twist and turn is self-driven or handed to the hero by someone upstairs. Once Devine intervention lands on the political table, the end of the book must follow its predictable outcome for even The New Rifleman cannot go against with wishes of God.

As the book was nearing its end, I was waiting, longing perhaps, for the bombshell takeaway; the warning message that would wrap up all the loose political ends. Instead, it was more a hero-riding-off-into-the-sunset, in a figurative sense that is. Kind of like the ending of the movie Deep Impact where a tattered Washington, DC is the backdrop for a barely functioning but quickly rebuilding government motivational speech. I just cannot help but wonder what is happening in the rest of the United States. It sounded like more of the same was going on around the country, but as one not living anywhere near Arkansas, some enrichment is needed beyond a line or two stating things are similar elsewhere. I know that is big challenge, but again, a patriot is interested in his personal homeland as well as the Country.

The New Rifleman is a worthwhile read as long as you can stomach the occasional chunkiness of sentence structure, word choice, and printing/Kindle format errors. I don't mind a bumbling main character who acts before thinking, but an author must be true to his genre. Inserting a romantic plot line into a Star Trek does not attract new viewers, and alienates the dedicated reader base who want gadgetry over gallantry. The New Rifleman hits the bullseye as a first-person introspective journey into violent political revolution, but exactly who it is written for is still a little off the mark.

Once you are wondrously fooled by The New Rifleman's opening shot, it's hard to put down. I thought I knew where this book was going early on. From 30,000 feet, I was right. But since the book chronicles life on the ground, the looming big picture ending hangs out like a ship on the horizon while endless challenges and opportunities are thrown at the Rifleman. By the conclusion of this long book, the reader is ready to put it down and move on. The plot exhausted. The storyline complete. Just the way it should be.